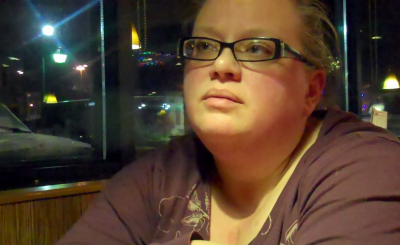 Meet Reneé. A Duluthian and a mother of four, Reneé has held the same full-time job for years.

In 2005, Reneé fell short on a few bills and decided to take out a payday loan to make ends meet. Last month, she came to the Capitol to testify in favor of payday lending reform. She was also featured in a Community Sketchbook story on MinnPost today. This is her prepared testimony:

My name is Reneé Bergeron and I’ve lived in Duluth, Minnesota for 14 years. I’m also a single mom, and I work full-time. I’ve taken off work today to be able to be here and ask you to please reform the payday loan businesses so that more people aren’t hurt like I was.

In 2005, I was short on rent and needed to make ends meet. Even though I was working full-time, with four kids and household expenses, the income just wasn’t enough to pay the bills. So I ended up turning to what I thought was the best option at the time, and I took out a payday loan.

At first, when you take out a payday loan, you feel on top of the world. You can pay off your bills and buy the things you need. It really gives you relief.

But when payday came around I couldn’t see how I could pay the bills that month and pay off my lender. So I took out a second loan, from a different lender, to pay off my first loan. That got me in a cycle. I ended up taking 8 or 9 loans from the Payday America store in Duluth, in addition to some loans from some other lenders, too. I used Payday America the most because I wanted to earn credits so they would lend me higher amounts.

Because I was paying so much of my income to payday loans, I eventually lost my housing, I lost my car, and I had to move with my kids into a shelter at the Salvation Army.

At that point I knew I needed help so I turned to the local Community Action Program of Duluth. My financial counselor there did a credit report, and she had me bring in all the paperwork from the loans. It was then I realized how bad it was. It was a cycle that I couldn’t get out of. I was trapped. There was just no way out of it. My counselor really helped me see what was happening. We decided to stop paying the loans and just kind of deal with the consequences of the harassments.

When all was said and done, I owed about $4,000, and I’m still trying to pay it off nine years later.

I’m doing better now – I still have my job. My kids and I are in permanent transitional housing now. But payday lending is what pushed me from someone who was living paycheck-to-paycheck, into someone who was in full-on crisis-mode.

Payday loans definitely made my situation worse. If you don’t have the money for whatever it is you need the loan for, payday loans mean you’re always going to owe it, and it’s going to make you that much farther behind every month for your regular bills. And then, as long as you have the loan, it increases in size with fees and interest, so that’s more money you’re going to be short every month. Eventually it’ll cost you your car, your house, a place to live. It’s not worth the risk.

Thank you for listening and I hope you will do something to save others from falling into cycles of debt.

← We have a Senate Hearing!
Real Minnesotans hurt by predatory payday lending →